How Cutthroat Furled Leaders came to be 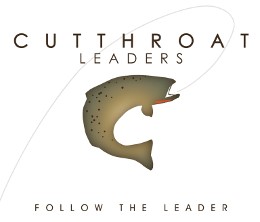 The short story goes like this. Almost 20 years ago, hiking to my favorite fishing hole, my mind flashed to images of hungry trout slamming my dry flies. As I turn a corner on the trail, I find an older gentleman casting in my favorite spot. Unknown to me at the time, my next decision would have a huge impact on the rest of my life. Rather than turning around and going elsewhere, I decide to slow down, take up a seat, and watch. As I sat, perched on an old windblown tree trunk, I was able to watch a much wiser Dry Fly Fisherman in action.

It only took watching a few casts to know I was in the presence of something/someone special. The rhythm of his casting, the presentation and the accuracy of his fly left me in awe. Quietly sitting back, I patiently watch from afar. After a few fish were netted and released, the man in the weathered vest turned towards my direction and asked if I wanted to throw some flies in this run.

After a few casts, a couple of missed strikes, I finally brought a small beautifully colored Cutthroat Trout to the net. The Gentleman in the old vest made his way back down to the river’s edge to congratulate me on my catch.

After a brief chat about the day’s fishing, I asked him for any advice he had. He spoke about achieving the proper drift, fly selection, not false casting over fish, you know all the basics. Then he showed me his set-up…

He had an old bamboo rod, not the prettiest rod I had ever seen. The rod was old, well used and worn… On his rod he had standard weight forward line and this thing he called a furled leader….. I was very intrigued about this leader. “how does it work, what material is it made from, is it better than my regular tapered leader”? I had many questions.

It was after this encounter that I myself began a voyage of building / designing the World’s best furled leaders. That was over 20 years ago…

The seeds were then planted for the creation of Cutthroat Furled Leader Company, which came years later.

Furled Leaders, What are they and why do I want one…?

I had hand crafted and fished my own leaders for many years before ever thinking about turning this Leader building passion into a business.

Back in 2010, a fly-fishing buddy of mine convinces me to participate in my first fly fishing trade show. This was the 2010 Boise Fly Fishing Show. We sold completely out of our product only halfway through the first day. It was at that time, that I knew Cutthroat Furled Leaders would one day be the best Furled Leader in the business.

It was at this time that I decided to hire a SEO / Website professional to help me reach the thousands of fly fishers worldwide. I met Adam Minic, owner of SEO of Idaho. I got lucky as he was also had a passion for the sport that I loved. 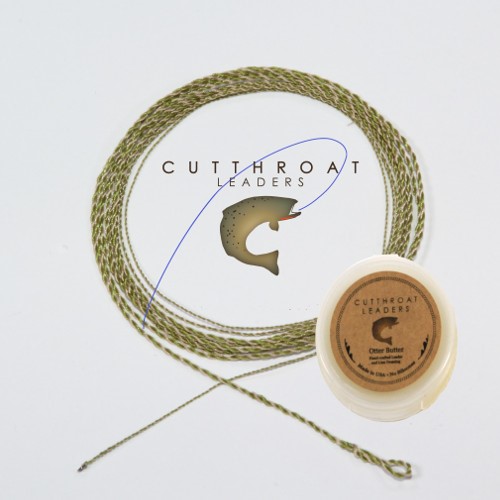 One of Many Website Header images we have had over the years.

In the early years of our business growth, we traveled the country doing fly fishing trade shows. We did shows in most all the cities that the Fly-Fishing show circuit visited.

We also visit many smaller Fly-Fishing shows across the country such as the Wasatch UT, Fly Tying show.

What is a furled leader…? A furled leader is all about Presentation, Simplicity and Durability. Tapered Furled leaders are created using a continuous strand of very small diameter material; therefore the leader does not have any of the memory that is often associated with a standard nylon tapered leader. This absence of memory has the most influence on the amazing casting characteristics of using a tapered furled leader. This creates a leader that falls straight out of the package the very first time you use open it. Because a furled leader is memory free, there No more stretching / pulling trying to remove the coiled memory. The furled leader / tippet and fly will lay out straight right from the first cast. The absence of memory allows all the energy of your loaded rod to travel down the line, the leader and ultimately to the fly. Your Fly line is memory free, why would you attach a leader that is not? 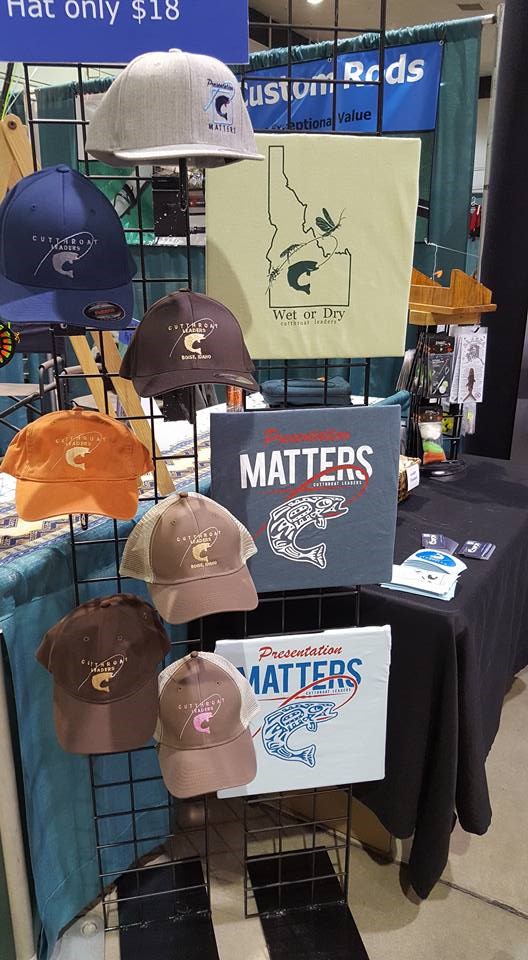 Because we have sold tens of thousands of leaders, I know our leaders are currently on all major brands of fly rods worldwide such as Sage Fly rods, Orvis Fly rods, Scott Fly rods, Winston Fly rods, Blue Halo Fly rods, Redington Fly rods and many more. 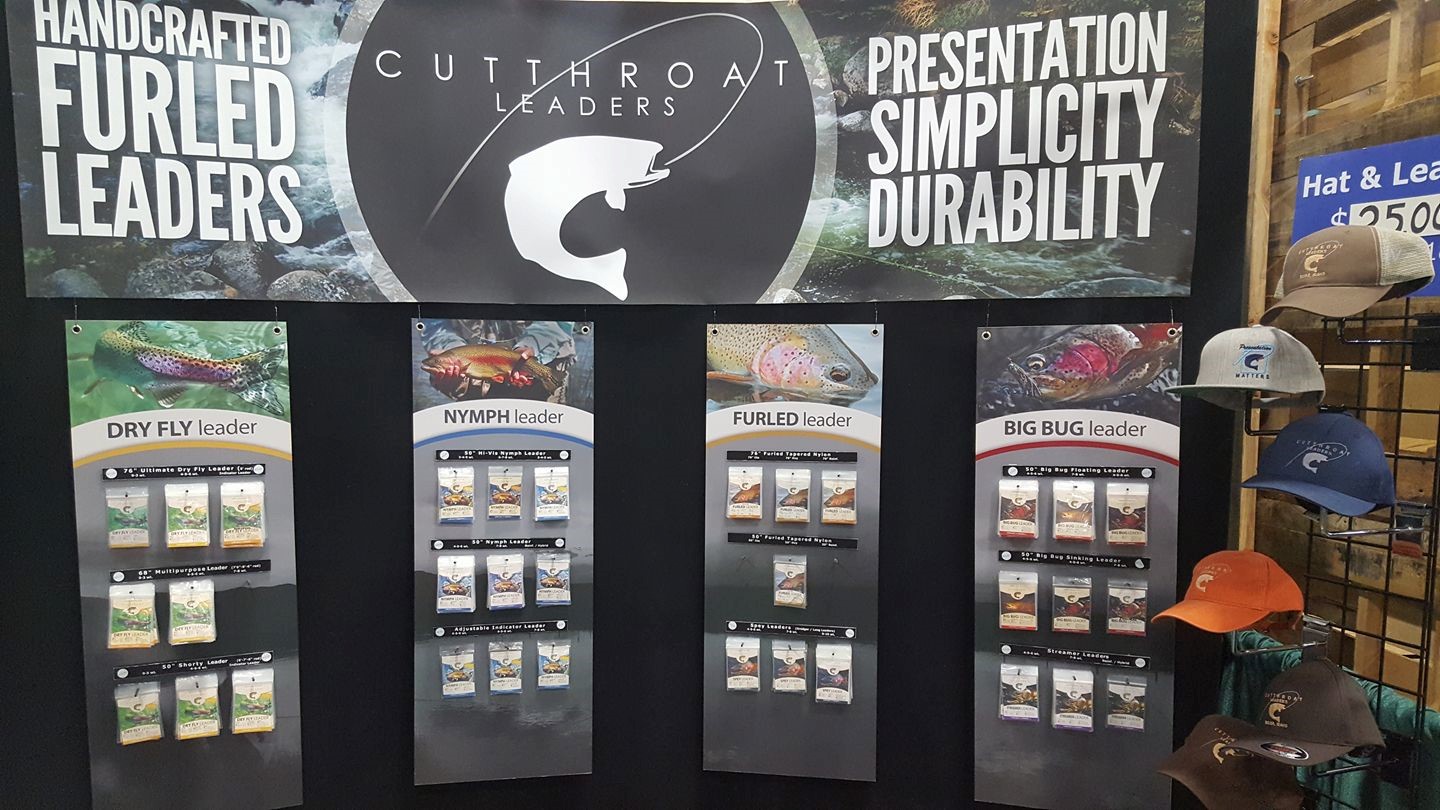 The first few years came with rapid growth. After mastering our unique methods for hand crafting furled leaders, we were ready to start offering our products to fly shops across the country. Cutthroat Leaders are on fly shop shelves all across the United States. We are also carried in shops in Canada, New Zealand, Australia and more.

Most of our business is from North American Fly Fishers, but we do ship internationally on a daily basis. We have very loyal customers from New Zealand, Czech Republic, England, France, Germany, China, Japan, Brazil, Poland and more. 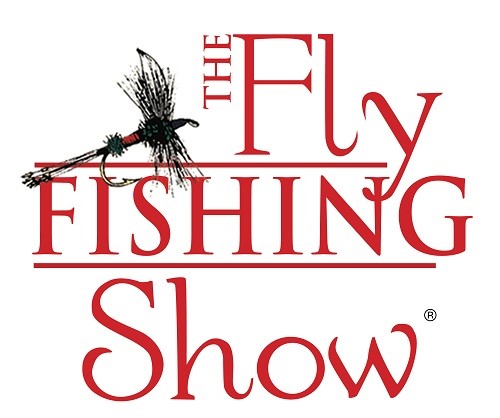 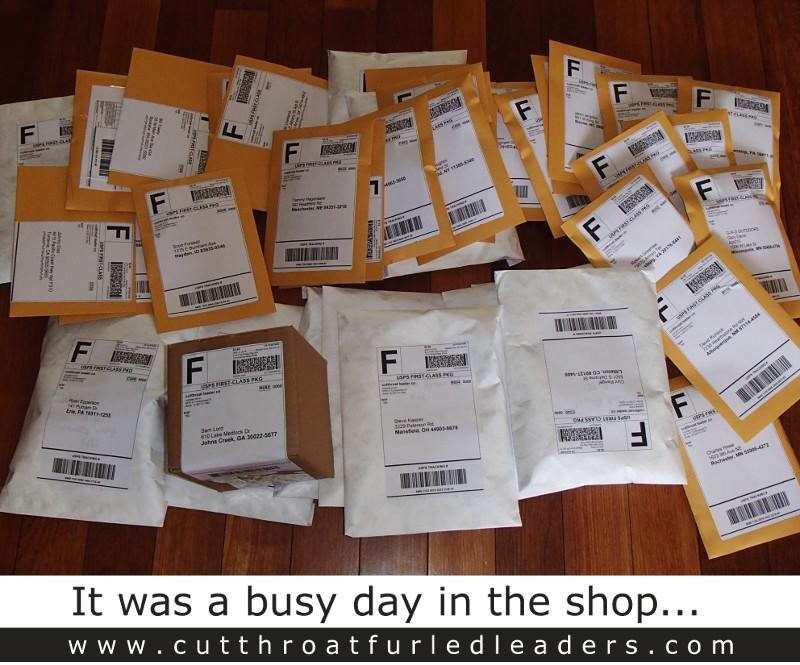 Furled Leaders are often confused with Braided Leaders. Braided leaders have had a great following of loyal fly fishers throughout the years and for good reason. They are far superior to tapered leaders for delivering a dry fly. But because braided leaders do not have any material in the center of the leader, furled leaders provide better energy transfer, therefor making them cast more accurately for better presentation.

Types of furled leaders and their applications:

Thread Furled Tapered leaders: are great when presentation matters, chasing trout comes to mind. Smaller flies, clear water, spooky fish…. A thread leader excels. Thread leaders are the leaders that come out of the package and or off the reel with no memory what so ever. Often times, even very experienced fly fishers smile when they first handle a thread furled leader. They simply can imagine the casting / turnover and presentation achieved with such a leader. However, thread Leaders are not good for throwing heavy flies. When gravity is a concern because of fly weight, a thread leader will collapse during the cast and your desired presentation will not achieved. 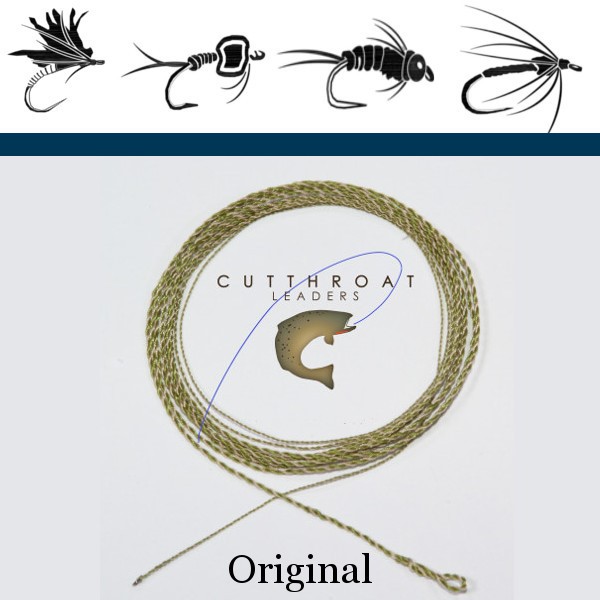 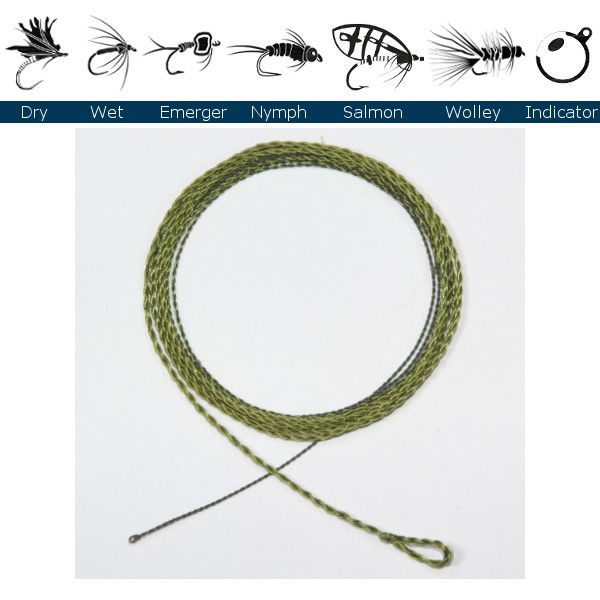 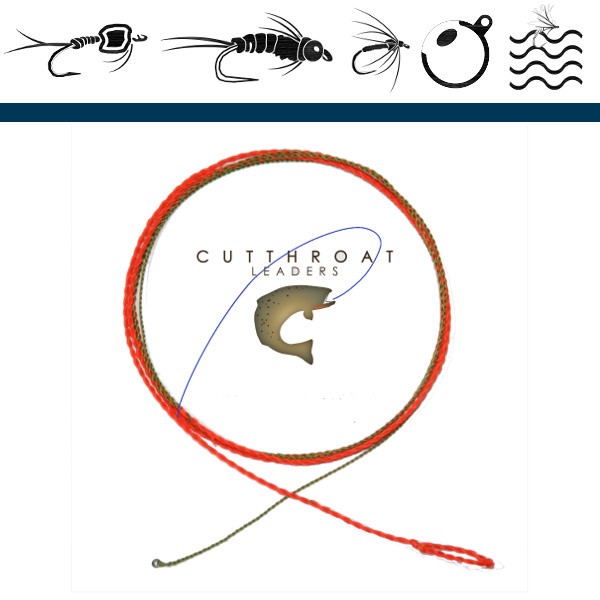 Hi-Vis or Strike Indicator Leaders:  These leaders have brightly colored section woven in during the hand crafting of each leader.  On a nymph leader, this creates a memory free sighter/indicator that will inform the fisher of the slightest of takes.  Indicator leaders have the Hi-Vis section at the tippet end of the leader.  This leader is used when fishing small dry fly’s that are difficult to track.

Reinforced furled leaders are great when fishing for larger fish that require heavier tippets.  Steelhead, bass come to mind.  These leaders are typically reinforced with a braided material creating a leader with a very high tensel strength.   Although these leaders have immense strength, they still layout nice and gently.

Nylon Furled Leaders: should be used when fishing heavier flys, especially with a bobber style indicator.  These leaders are often referred to as “Big Bug” or large game leaders.   Because these leaders are created using Nylon or fluorocarbon material,  these leaders will need to be stretched after being removed from the package.  Most manufactures recommend holding either end of the leader and stretching for 5-6 seconds. 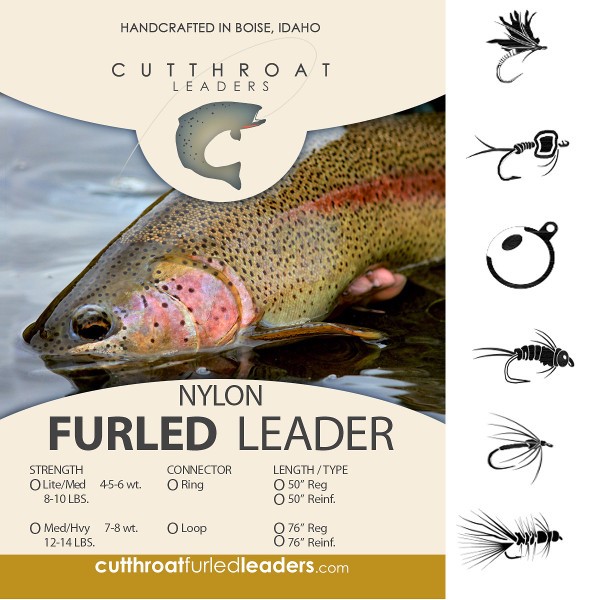 Treating Furled leaders to float. The best type of floatant to use is one with a paste type consistency. Loon Payette Paste, Otter butter or Musilin Paste come to mind. I prefer the use Otter Butter Paste.
Presentation: You will see improvements in accuracy, casting into the wind as well as your casting distance will be lengthened. Another major benefit, you are always fishing with an engineered / designed leader. No more short stubby leaders that will not turn a fly.

Simplicity: Most furled leaders come with a loop on the fly line end. The tippet end comes with either a tippet ring or a loop for easy tippet changes.

Durability: Thread Furled leaders are known for durability. If a furled leader is used properly, i.e. use the appropriate size tippet for that specific leader, they can last a full season of heavy fishing. If you do get a wind knot, pull the knot tight and keep fishing. 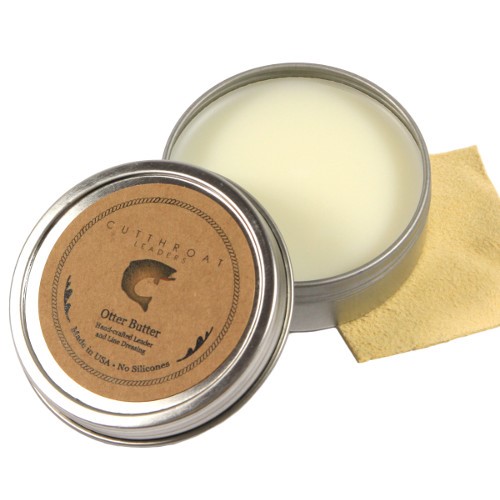 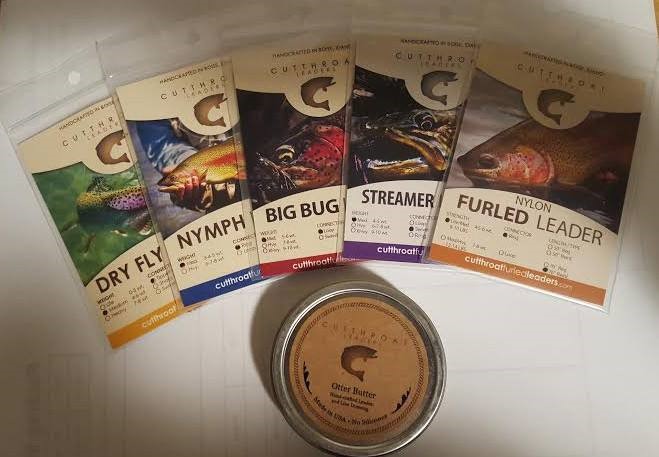 Cutthroat Leaders offer the fly fishing a leader for every fly-fishing scenario.

We offer an FAQ portion of the site that provides all kinds of info. https://www.cutthroatfurledleaders.com/faqs/

We at Cutthroat Leaders pride ourselves on Customer Satisfaction. If you are not 100% satisfied with your purchase, you can return the product and get a full refund or exchange the product for another one of similar value. The return shipping is paid by “you” the customer. You can return product up to 30 days from the date of purchase. If you have issues or questions, please email us at This email address is being protected from spambots. You need JavaScript enabled to view it. We will do everything in our power to resolves the issue and leave you a satisfied customer. Thank you for the interest in Cutthroat Furled Leaders. 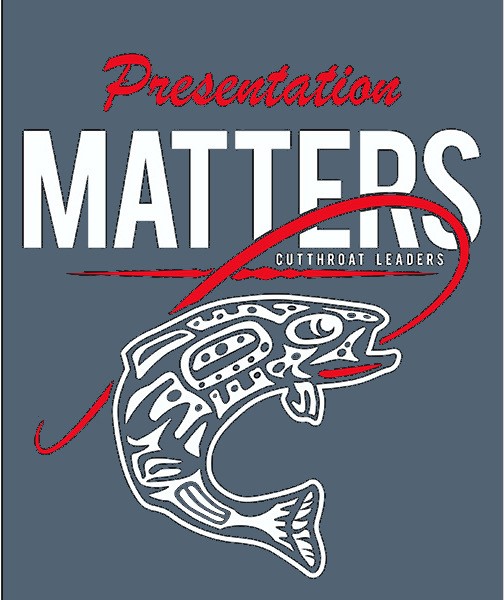